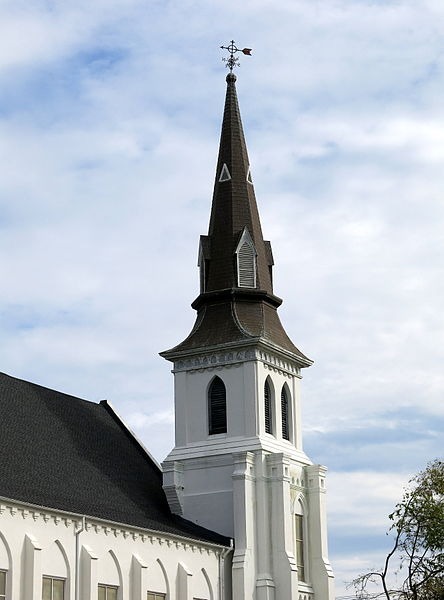 I usually reserve this space for something pithy or maybe an update on my novels, but right now it seems more fitting, more necessary, that I just write out some feelings. The massacre at the Emanuel AME Church in Charleston on Wednesday night has been on my mind a lot, and I just feel the need to get a few things on the record.

That we are debating whether these murders rise to the level of “terrorism” or whether they were caused by “racism” seems absurd to me. They were the very definition of terrorism–acts designed to terrify a person or group of people. Even if he wasn’t photographed previously wearing patches that depicted the flags of apartheid South Africa and Rhodesia, we can tell that the killer is an undeniable racist.

More people died at Emanuel than in Boston during the marathon bombing. Indeed, since 2002, domestic terrorists have killed more Americans than foreign organizations. And yes, I admit to feeling bitter humor at watching the white male Republicans running for president bend over backwards to avoid deeming the massacre an act of terror caused by a racist.

We live in bad times. Last night I found myself asking whether this country was headed towards a new race war, then remembered that for African Americans living in the South, there never really has been peace. The violence imposed on them by slavery at the founding of this nation has changed in form over the last few centuries, but never really went away. The victory of the Union in the Civil War merely eliminated slavery, but did little else to bring full citizen status to African-Americans.

The premature end of Reconstruction gave birth to Jim Crow in the south–laws of restriction and segregation that took a century to undo in the courts. At the same time, the Ku Klux Klan ran wild.

What progress have we made since the U.S. Supreme Court undid segregation? What civil liberties victories can we look to since the Voting Rights Act and Civil Rights Act passed in the 1960s? African Americans are still living in fear in the South–indeed, in much of the U.S. There are disproportionate numbers of them in our prisons. The racism and discrimination they still face is in itself an act of violence.

You want to know how bad it is? Read Ta-Nehisi Coates’ brilliant “The Case for Reparations,” which ran in The Atlantic a year ago. I’m ashamed to say I only first read it a few weeks ago. It’s a long essay that’s full of profound thinking and heart-wrenching reporting, and every American should read it. Even better, they should think about it.

Coates wants a national reckoning–a point at which all Americans think about their history, acknowledge its horrors and then agree to do better. When I was younger I know I would have thought that possible. Now, today, after Wednesday–I doubt it.

I’ve never been to the deep South, which is at least part of the reason I find their definition of “heritage” requiring them to genuflect before dead racists and slave-holders to be nonsensical. Why is the Confederate battle flag still flying over the South Carolina state capitol? Why does the State of Mississippi’s flag still depict the stars and bars? Why are at least 10 U.S. Army bases named for Confederate generals–men who commanded divisions and brigades that killed U.S. Army soldiers?

And while I’m at it, why are while male southerners like Rick Perry–a craven poser who wants power but lack the wisdom, judgment and raw intellect of someone who can wield it responsibly–treated like serious presidential candidates? Men like Perry (who has laughably, insanely, characterized the Emanuel AME killings as an “accident” stemming from drug use) seem perfectly happy with the status quo; with the racial injustices African Americans face on a daily basis. And they’re perfectly unwilling to describe a racist murderer as anything other than someone who’s “evil,” as though he exists on another plane of reality.

Above all, the right-wingers in this nation (and indeed, many who would call themselves moderates) refuse to acknowledge that America is, at its heart, a violent nation. Ask the Africans forcibly brought here to run the South’s economy. Ask the Native American tribes who ranged from the Atlantic to the Pacific–until Manifest Destiny all but exterminated them. Ask Central American, South American, Asian, Middle Eastern and Caribbean nations who’ve regularly contended with U.S. military invasions and occupations over the last century. It doesn’t matter who’s President of the United States, or which political party is in charge–the solution to terrorism is simply to build vastly greater weapons (and secret prisons) and then go bomb other nations.

I can remember teachers telling my class in elementary school that ours was a generation of peace–what a nasty joke that now seems. Nearly as rotten as the worst slur the right can throw at the left–that it “hates America.” Given the totality of violence that permeates American history and society to this very day, it’s hard to imagine why anyone would love America.

View all posts by anthonypignataro